Greece: The beauty of Milos 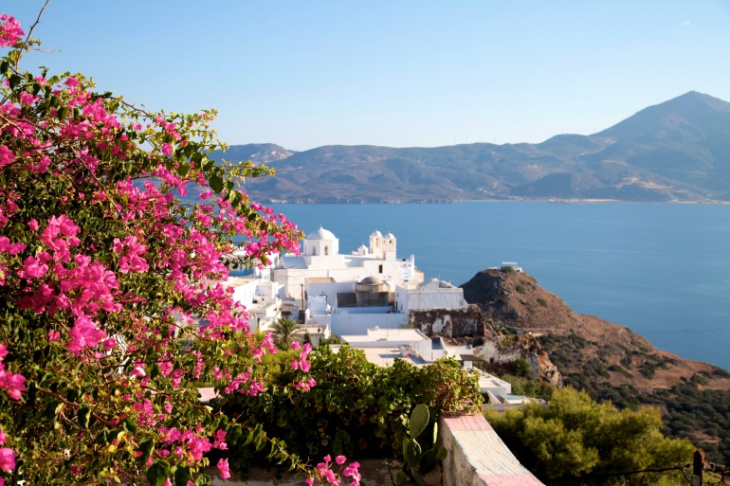 After enjoying the history and culture in Athens, we are ready for something with great nature. Milos! I found the island in the "hidden gem" list for Greece and what a great choice it was! The island has 70 different beaches, it's not overcrowded by tourists; the western part is more wild while the eastern part is more developed. We spent 6 days there but it was not enough.

Our ferry was leaving very early, 7 am, we managed to get to the port of Piraeus easily by metro. As expected, it's a total chaos. Luckily my colleagues already warned me that I needed to check where to pick up the tickets, so we did the homework with google maps but there were many who didn't and were running in all directions. We exchanged our confirmation agains tickets and found our ferry easily. The whole thing seemed very confusing to us - somehow me and my husband we cannot sit next to each other (why the hell to sell tickets together then???) and we noticed that we were not the only couples who look confused. The bar was open and asian tourists were already enjoying frappes and spinach pies... Off we go! Up up and up.... and the everybody got sick. Around 20% of all people on the boat were puking: next, on the right, on the left, in front... then the luggage started to fly around... yes, the waves... apparently not a big deal. The crew kept distributing the bags. Off went the spinach pies... not for us luckily!

After 2,5 h ride we were in the Adamas port and we went straight to our Hotel Liogerma - a perfect location with perfect breakfast. 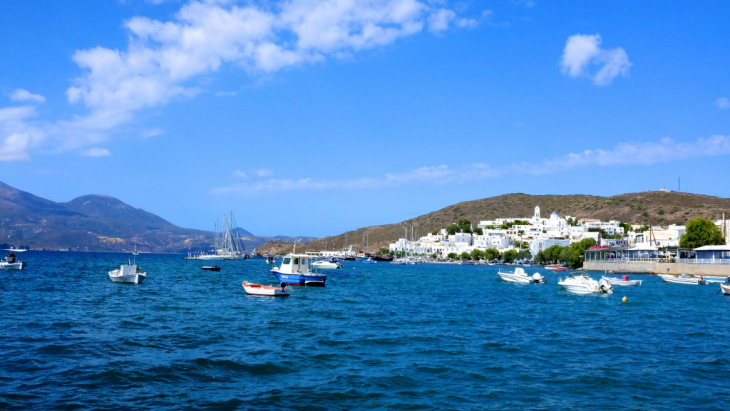 The plan was not to do anything, just relax. We went to a beach just over the small hill and we were all alone. The water was perfect; it was hot and lovely! Yessss! What we needed.

Here are couple of sites with all the beaches

In the evening we made a tour to visit boats to book a trip to Kleftiko or around the island. In the tripadvisor I had read about Oneiro and Polco. But the first one was already booked for several days in advance. We also discussed the possibilities with some other boats but the moment I heard "this will be like a paradise" - no thank you! We arranged out trip with Polco with captain Niki (that's how a captain should look like - with a beard and a pipe! :) But the trip would not be to Kleftiko (because it was too windy) but it would be to the other side of the island. Ok, we were not very happy but as we had no choice, we agreed.

At 10 am were there at the pier. But it turns out that our captain would not be Niki with the beard but his son and his assistant. I felt that we were cheated, I wanted a captain with a beard and a pipe! ;-) We were 9 on the boat and the atmosphere was really great from the beginning. Everybody was super friendly and captain Paul was great (he has a beard but no pipe). There was enough space for everybody. And Milos is really beautiful. We managed to talk about everything, about local life, crisis, books, philosophy... if you want you can swim, if you want you can just sit on the deck... The day was full of rich experiences and in the evening we felt like we have known the other people for years. Couple of drinks (oh, i loved Mastiha) on the boat and here comes the evening. 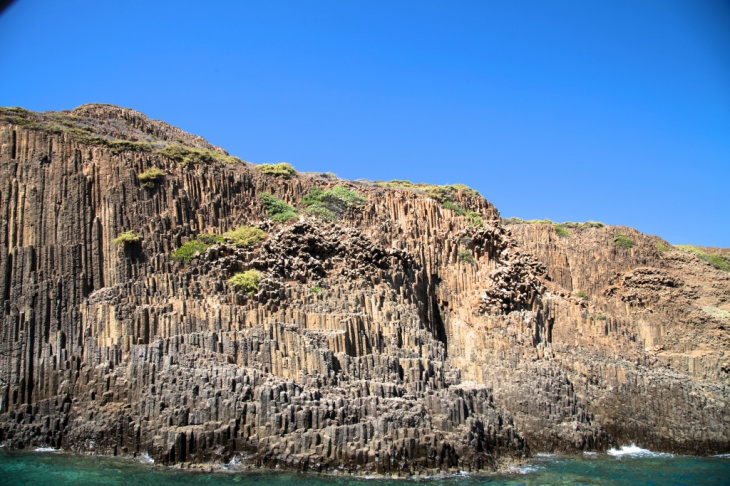 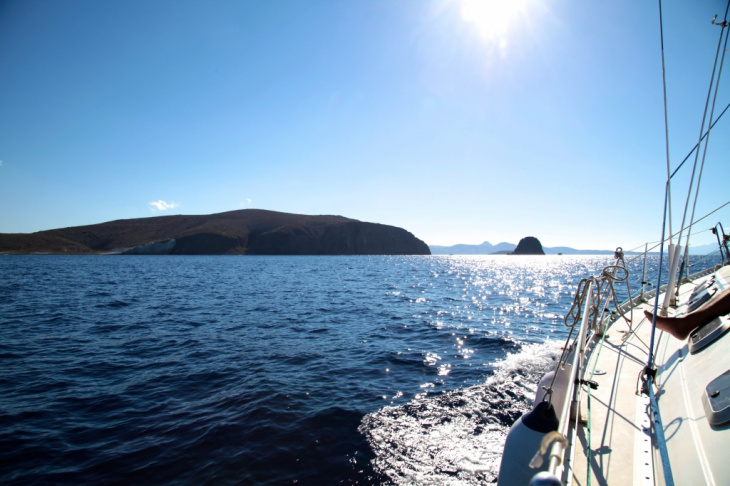 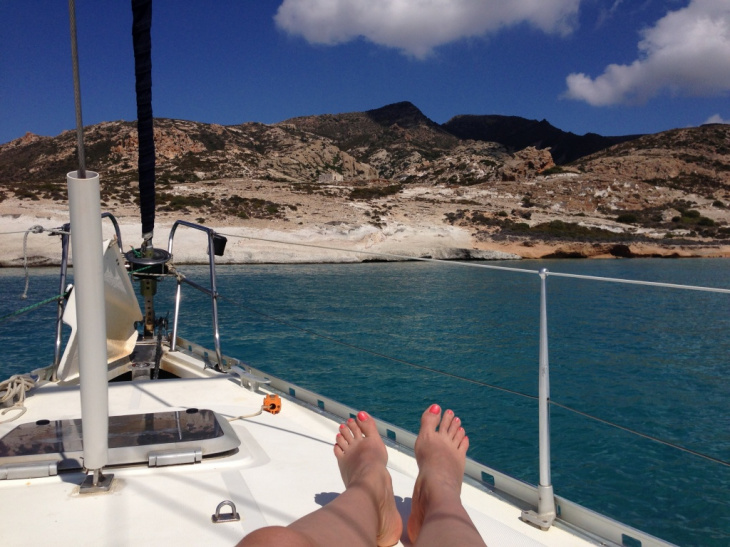 For the next days we had rented Fiat Panda 4x4 to discover the wild west. GPS was not working, so luckily I had bought a map before, it had great descriptions too.

Our first trip was to the Thiafes beach, it's known for old mines and lovely water.

Here you can find a good description about the mines. 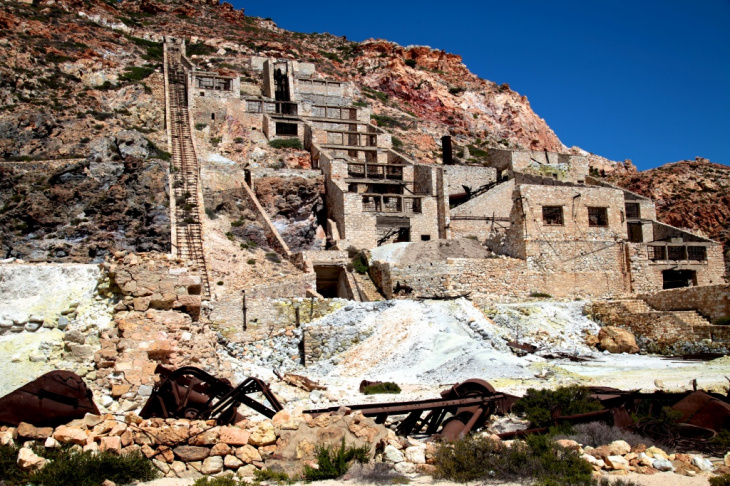 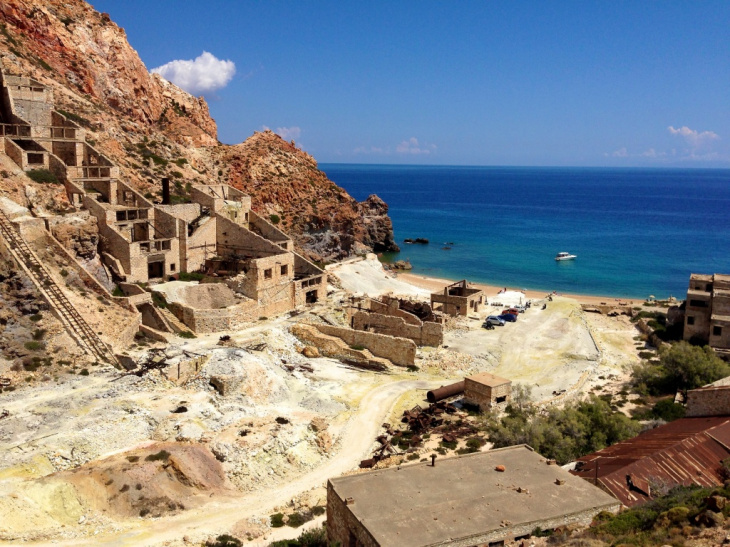 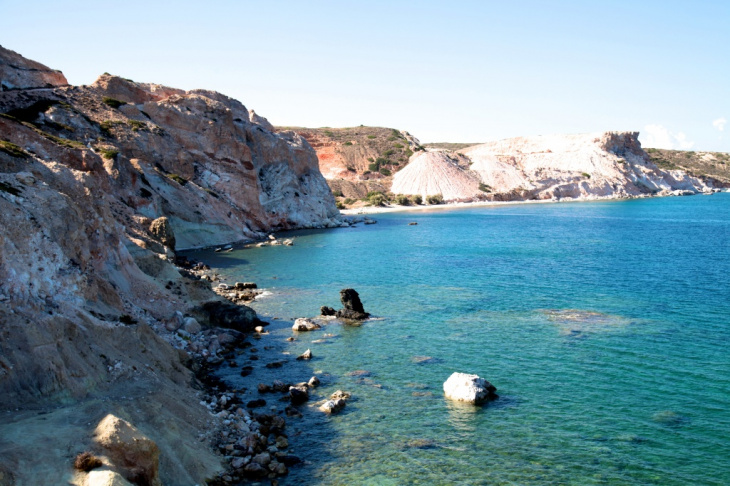 And then Kolymbissionas beach where we were completely alone! 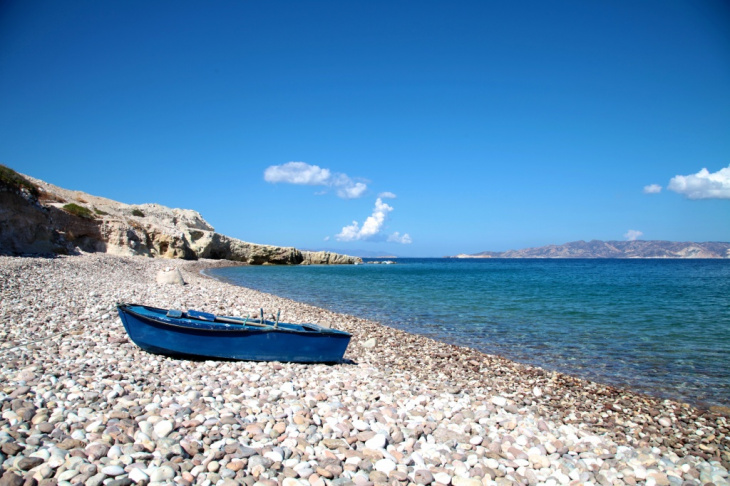 As we awere close to the mines (in Milos 40% of income comes from the mining business) we decided to have a look. We chose a road that was dedicated to trucks, it was not a very good decision because they work 24/7 but it was the only way to get closer! Woooooowwww. The colours!!!! 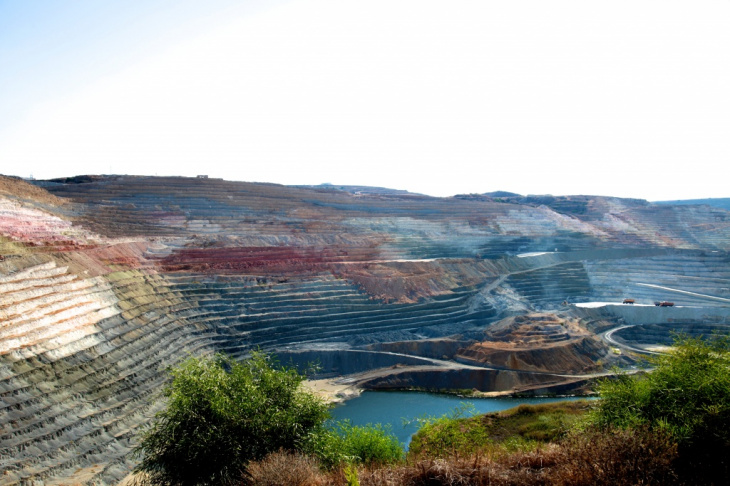 The company S&B is loved by locals as it offers many jobs and they support different projects but of course the objective is to make profit. Milos is also known for organising mining conferences. There was one while we were there. The were couple of Japanese who stayed in the same hotel as us and were discussing how new minerals are discovered every year and how they are named (yes I know it's not polite to listen to other conversations but it was so interesting!) 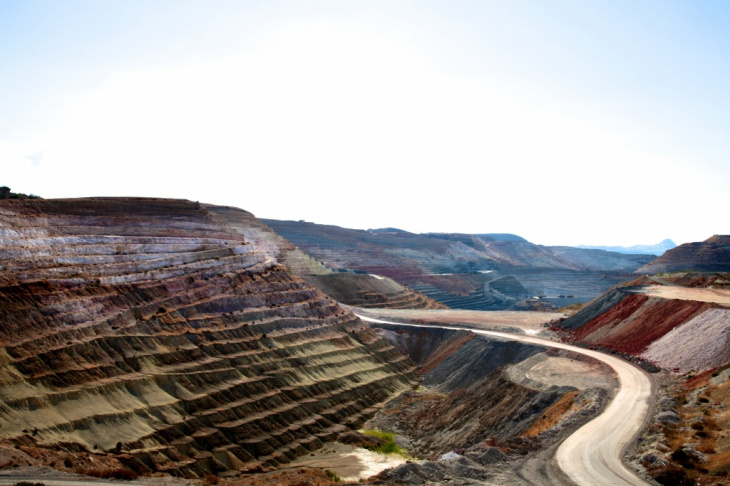 Next day we had a planned to walk till Kleftiko. Yes, WALK. I had found out that was feasible, you just have to drive and then walk for 1 h or so. http://www.tripadvisor.com/ShowTopic-g49…

On the way we saw the famous Tsigrado beach - you can access it only by rope. When we were there, the beach was in shadow and did not look so appealing. But it was Kleftiko that we were interested in. Most of the road was actually Ok, we missed one turn but soon got back to the main road. Once we had reached the place where the path should start, we got out of the car and saw two other cars parked.  We hadn't seen any single person all the way. And then we saw two guys with GUNS coming in our direction... upssss... I didn't remember seeing a sign "private" or something. Panic... Hunters! But what are they hunting so late in the morning? Birds? Goats? Tourists? I asked if this was the right place to go to Kleftiko and they confirmed. Oufff....

The trail is well marked with white stones and Kleftiko appeared in front of us rather quickly. There was only one boat, it must have spent the night there. 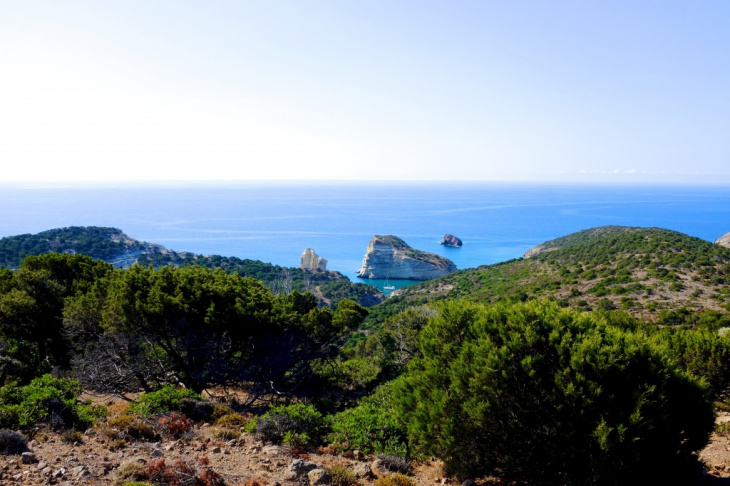 After a walk of 50 min we had arrived in Kleftiko. We were all alone! The whole place was only for us! Beautiful! But the same time very scary... if something happens, nobody to is there call... And then after 30 minutes or so first boats started to arrive, then second, then third, then the next... and many more... We were really happy that we enjoyed the place without all the other people. We also decided to head back as there was no shade. The walk was up hill and it was super hot. Luckily we had enough of fresh water with us. 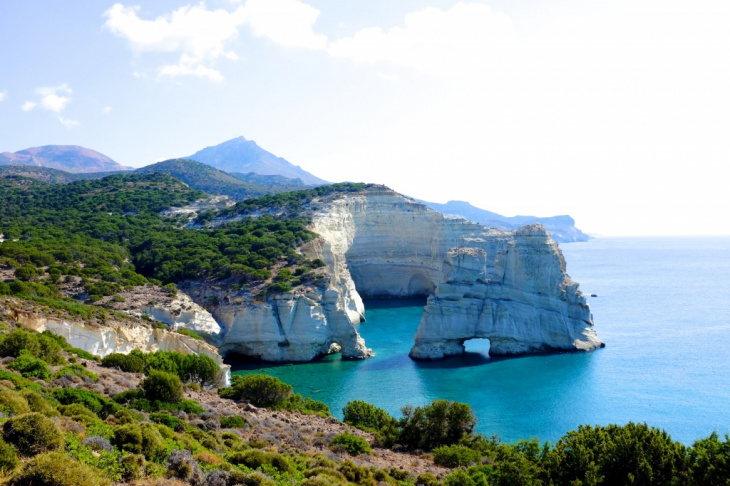 On the way home we noticed the Achivadolimi beach. Somehow I had not noted this one as a "must see" but it became our favourite. Water was divine, could snorkel and watch fish,  there were some trees for the shadow and so pretty all around. 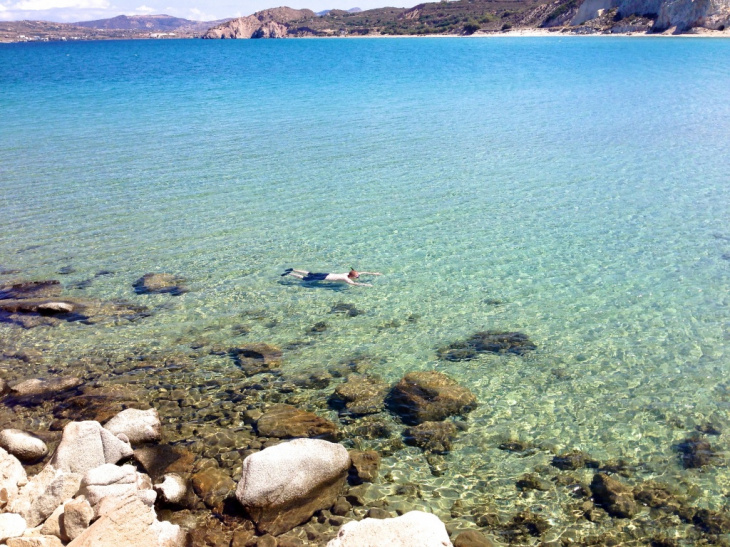 In the evening we had Plaka and Kastro on the agenda to see the sunset. 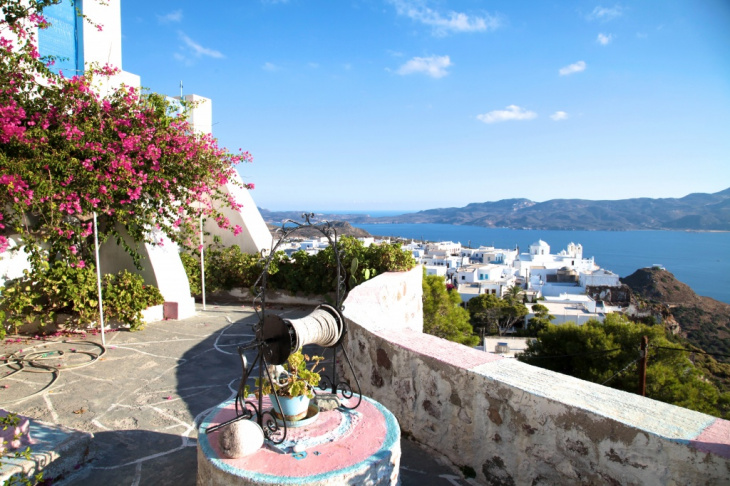 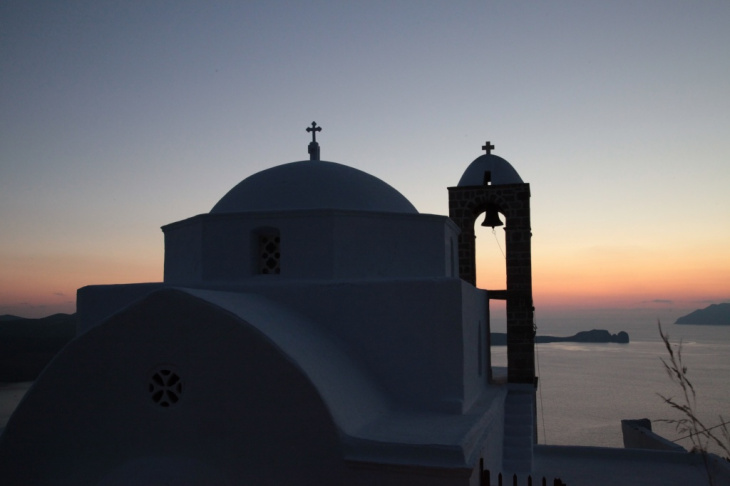 We had stopped counting the days, it was such a pleasure - beach, lunch, afternoon beach, walking on the pier, admire the yachts. We had made friends with the assistant of the Polco crew. While he was attracting clients for the next day, we talked about lots of interesting things.

The next day we wanted to discover more of the western beaches. We end up in Amoudaraki. We were alone again! It was a huge beach! Water was shallow and lovely. Later we were joined by two older nudist ladies but they stayed in their corner and we stayed in ours. 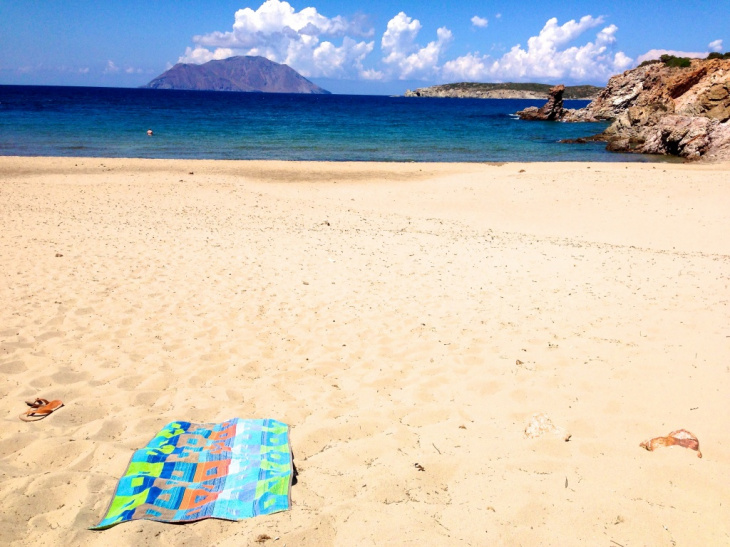 In the evening we went to see the most famous beach of Milos - Sarakiniko - it's called a moon beach but to me it looked more like a beach made out of fresh cream. There were many people there (so that's where everybody is in Milos!) so we decided to go there early next morning. 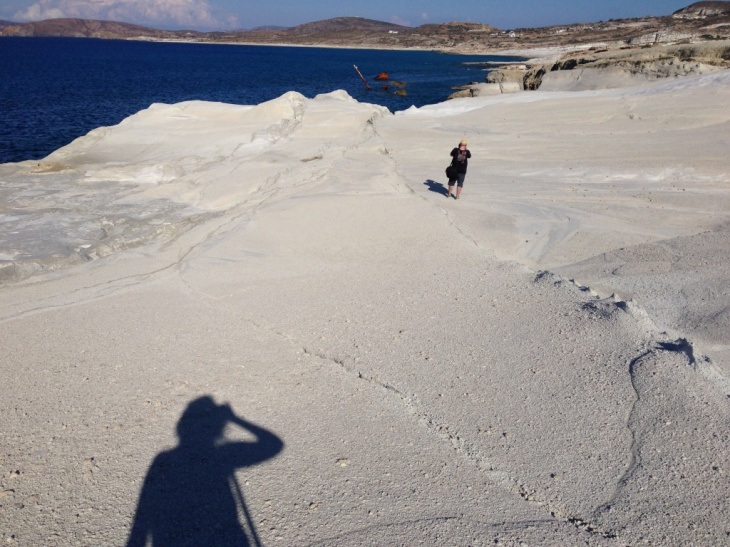 As expected the next day around 9 am there was nobody... just waves, wind and sun sun sun... 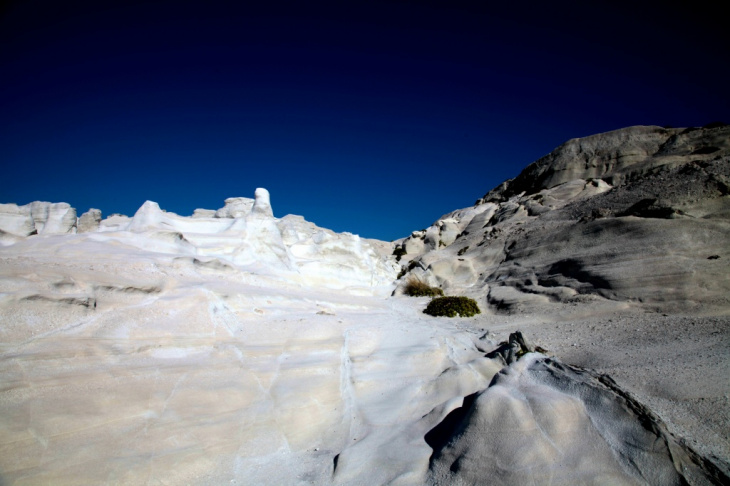 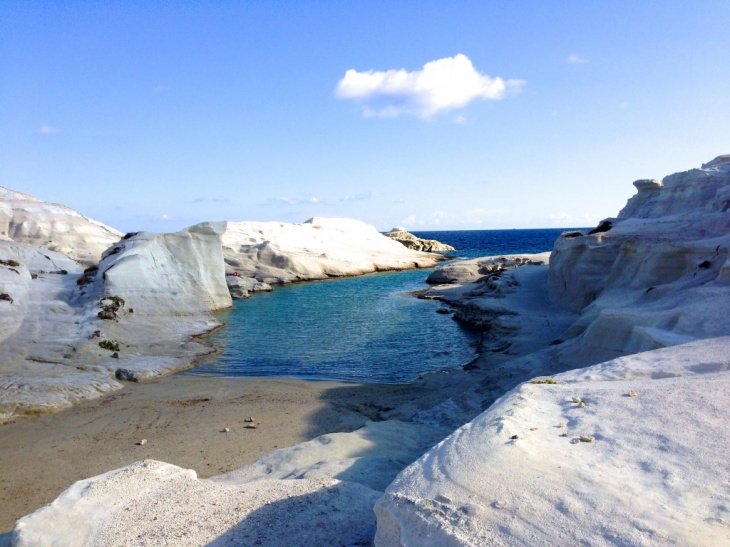 We visited couple of small villages on the easter side - very lovely! My favourite was Mandrakia. 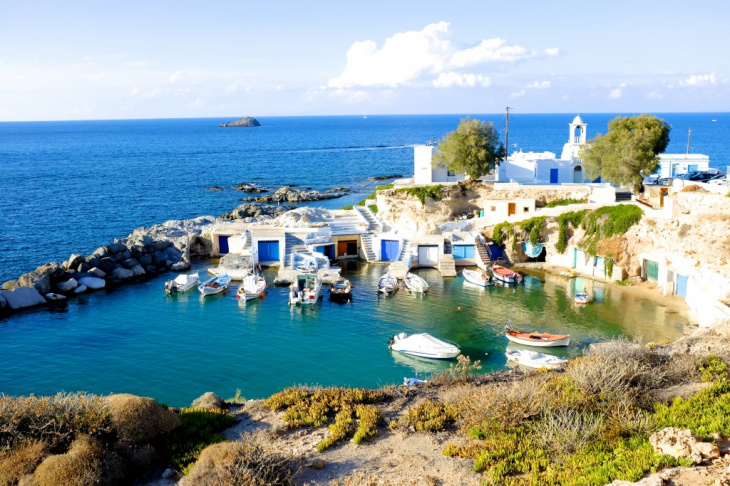 Next day we already had to leave for Santorini... felt kind of sad because we really grew fond of Milos. Will be back! 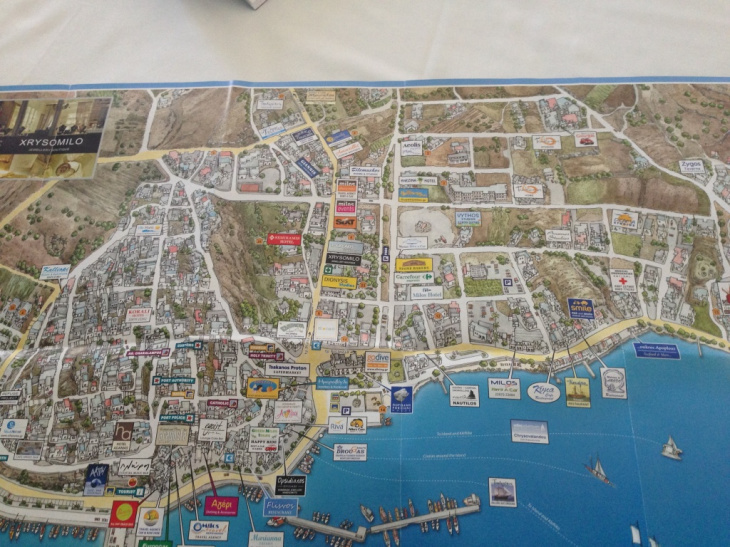 - Poor cats are everywhere! But thy are witty and know how to get food

- O Xamos and Zygos are really superb tavernas. "Today we have lamb chops, souvlaki, tadziki, chicken..."  mmmm. The best Greek salad ever is from O Xamos 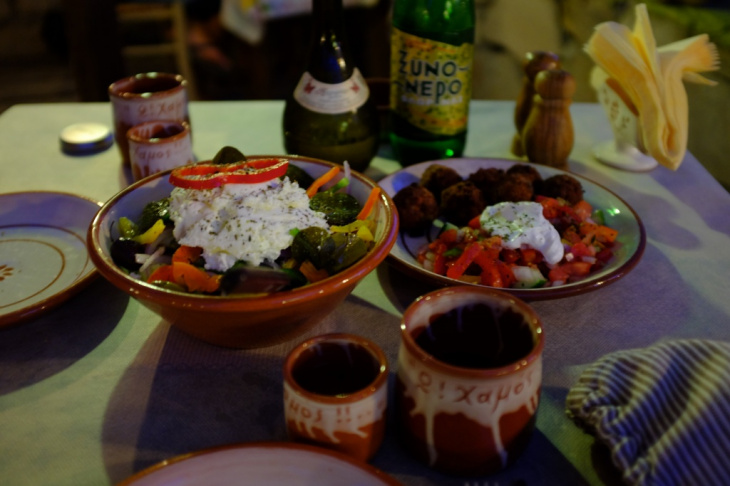 - To enjoy the island you really need to have a car, preferably 4x4

- The sunsets are WOW from Plaka, just as impressive as in Santorini but without sharing the moment with other thousand or so people


4 comments - Greece: The beauty of Milos

Jane - August 21, 2015 at 11:59 am
Thanks for sharinng. Looks great!
Sue - September 11, 2015 at 12:02 pm
Now you have inspired me to visit next year. We are flying into Santorini and returning from Mykonos. Trying to work out an itinerary for three weeks including smaller islands this year like Sifnos etc. Any suggestions alongside Milos?
vira - June 21, 2017 at 7:46 am
you're very lucky to have visited so many spots in milos.
i spent only 3 days there (also in 2015, but in may) and didn't go to many, because there was a bit of rain and we went around by motorcycle so it was cold from the wind. but we enjoyed our time there, milos gave us the cozy feeling all the way.
Bob - December 10, 2018 at 9:17 pm
We love Milos and you have captured it perfectly. If you ever return try to do the Oneiro trip with Elias . Another brilliant boat trip is on Perseus with Andreas from Pollonia to the island of Poliaegos. You pretty much covered everything in such a short time , we had 30 days. !